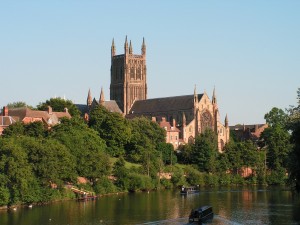 2015 marks the 800th anniversary of the sealing of Magna Carta by King John. For the first time, the rule of law was given precedence over the rule of the monarch.

By the time of this momentous event on 19 June 1215, King John had already formed a special relationship with Worcester and the surrounding county. He often visited Worcester Cathedral to worship at the shrine of Saint Wulfstan. His favourite hunting grounds were nearby in forests at Wyre, Feckenham and The Chase.

But his relationship with the county was destined to be bittersweet. As civil war brewed and the King was forced to concede many of his powers under Magna Carta, Worcester declared for the rebellious barons.

In July 1216, the Kingâs forces recaptured the city, but the monarchâs days were numbered. He died in October that year, specifying in his will that he be buried in Worcester Cathedral. His will and artefacts will be on display in the Cathedral library from September 2015.

Johnâs great tomb is a masterpiece of early thirteenth-century sculpture. It gives Worcestershire a direct link to the story of Magna Carta, and to the story of Liberty and Democracy, that is genuinely unique. For more information on Worcester’s celebrations, click here. 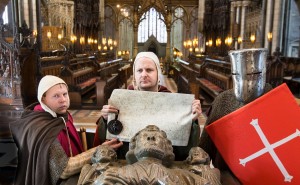 On 4th March events in Worcestershire were launched as King John was reunited with Magna Carta at a special event to commemorate Worcestershire as the Home of Liberty and Democracy.

Thirteenth Century barons stormed their way into the historic Worcester Cathedral, resting place of King John and home of his great tomb, surmounted by the oldest royal effigy in England.

There they confronted him with a copy of Magna Carta, recreating the moment 800 years ago that put in place one of the most important building blocks on the road to democracy in Britain and the world.

Marking the 800th anniversary of Magna Carta, Worcester Cathedral is staging a major exhibition from March 2015 to December 2016, accompanied by a programme of inciteful lectures and talks, including a presentation by Sir Robert Worcester, Chairman of the national Magna Carta 800th Committee.

Bringing the story of Magna Carta alive for children, the Cathedral will host performances of a specially commissioned play for youngsters, which will also tour around schools in Worcestershire and the metropolitan borough of Dudley. A Tale of Bolshie Barons, a Crafty King and a Timeworn tomb in Wooded Worcestershire, will be performed by Worcester Repertory Company.

A special service with a peal of bells on June 14 will mark the actual 800th anniversary of the sealing of Magna Carta and a series of anniversary concerts will be held in the same week.

Uniquely, the Cathedral will offer the opportunity to view King Johnâs Will and other artefacts related to the monarch, from September.

50 years on from Magna Carta, another of the founding fathers of British democracy arrived in Worcestershire: Simon de Montfort.

The extravagant spending of the weak but vicious King Henry the Third and his son Edward had frustrated the barons. Led by De Montfort, the Sixth Earl of Leicester, they launched a civil war against the monarch in 1263.

De Montfort captured the King and his son at the Battle of Lewes. He established Parliament, until then simply the kingâs council, as a representative body for the first time. This is still recognised today as the template for democratic nations across the globe. With this power base, de Montfort ruled the country for a year until 4 August 1265.

Stopping to allow King Henry to hear mass at Evesham Abbey, in the south of Worcestershire, de Montfort suddenly found himself confronted by a Royal army four times the size of his own. Prince Edward had escaped capture and he had one objective â the rescue of his father, the King. The brutal battle raged throughout the town of Evesham and ended with the bloody death of de Montfort.

De Montfort was seen as the peopleâs champion, and quickly became widely respected as a hero in the tale of liberty and democracy.

The 750th anniversary of de Montfortâs downfall, a central moment in the English struggle for democracy, will be marked with two weeks of events in this beautiful English town, including a lecture by Professor David Carpenter, Professor of Medieval History at Kingâs College, London.

The highlight of the fortnight will be a two-day Medieval Festival, including a thrilling battle re-enactment, living history displays, medieval fair and much more.

More details of the commemorations will be available shortly at www.battleofevesham.co.uk

All events below can be found onÂ www.worcestercathedral.co.uk

Worcester Cathedral is the last resting place of King John. Just before his death in October 1216 King John requested âI will my body be buried in the church of St Mary and St Wulfstan of Worcesterâ.

Worcester Cathedral has been a place of prayer and worship for fourteen centuries. During Anglo Saxon times Worcester was one of the most important monastic cathedrals in the country. King John had a special affection for Saint Wulfstan, whose shrine in the Cathedral he visited it on many occasions. The codicil to Johnâs Will is usually on display in the Cathedral Library. King John is buried in the Cathedral Quire, in front of the High Altar. His tomb has the oldest royal effigy in England, which is thought to have been made in his likeness.
Magna Carta and King John Exhibition 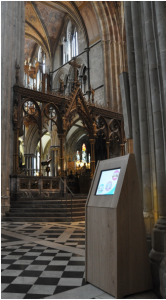 As well as interpretive boards there will be information in digital touch screen format and on the Cathedralâs mobile APP. 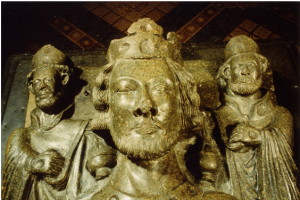 Was King John a bad King? Listen to one of the Cathedrals experienced guides talk about Johnâs life, loves, and the time that he lived in. Hear about what happened to some of Johnâs family after his death and the legacy that his son Henry III took forward, what he did for Worcester Cathedral and his fight with his brother in law Simon de Montfort.
The talk can be booked for a group as part of a visit to Worcester Cathedral and will take place in the Quire in view of King Johnâs tomb.

King John & Magna Carta Play for Schools: A Tale of Bolshie Barons, a Crafty King and a Timeworn tomb in Wooded Worcestershire

â¢Â April – Mayâ¢
A high impact, high energy, educational, fun, specially written play. Performed by Worcester Repertory Company to 48 schools within the Diocese of Worcester, some beside King Johnâs tomb, others at the schools.

‘Bad King John, did he do good in the end? The relevance of Magna Carta in the 21st Century’ – Sir Robert Worcester

â¢Â May 28th, 6.00pmÂ â¢
The talk will take place in sight of King John’s Tomb in the stunning setting of the Cathedral Quire, where King John was buried after his death at Newark in October 1216. The effigy on the top of the tomb is the oldest surviving royal effigy in England.

Sir Robert is Chairman of the national Magna Carta 800th Committee. Set in the stunning setting of the Cathedral Quire in the sight of King Johnâs Tomb, with a pre-lecture reception.
Book on 01905 732900 or email [email protected] 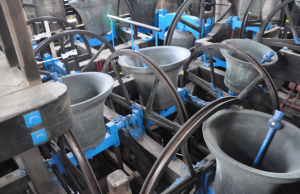 Join this special service of Evensong sung by the Cathedral Choir in the Quire where King John is buried. This Holy space responds to all human need, giving forgiveness and peace to any who seek it.
It is likely that this traditional act of worship will include the new Magna Carta Anthem.
From 12noon to 4.00pm a peal of bells rung by the Cathedral bellringers will preceed the service.
The Cathedral is part of the worldwide Anglican Communion and has a deep commitment to fostering unity in the church and world.

Everyone is welcome to visit the Cathedral and to attend its services. 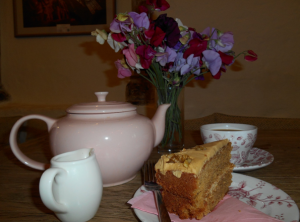 LiberTeas at Worcester Cathedral are a series of afternoon talks with tea all based around the subject of Liberty inspired by Magna Carta. Each talk is by an expert in their subject and will last for approx. one and a half to two hours with time for questions and answers. The LiberTeas are planned to be situated in the Hickes room of the Guesten on College Green behind the Cathedral. The Guesten is Queen Anne building, close to the site of the original Guesten building were guests of the Priory would have stayed in monastic times.

On Wednesday 15th July 2015, from 2.30pm to 4pm a talk by Canon Georgina Byrne on Suffragettes, on the anniversary of birthday of Emmeline Pankhurst.

On Wednesday 5th August 2015, from 2.00pm to 4pm a talk by Tim Porter on Simon de Montfort and the Battle of Evesham.

On Wednesday 23rd September, from 2.30pm to 4pm a talk by Professor Suzanne Schwarz on Slavery. 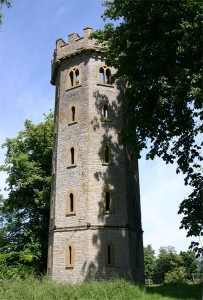 This is a self-guided Trail, clearly signed by waymarked posts, which takes you over the general area where the battle was fought. It simply attempts to show you the lie of the land and leaves you to envisage for yourself what happened here on 4th August 1265.

Besides exploring the scene of the battle, we hope this walk will help you enjoy the beauty of this typical Vale countryside with its extensive orchards â a very important part of Eveshamâs later history. There are glorious views to Bredon Hill and the Malverns.

The Battle Well fieldÂ is tenanted by the Society and actively managed as part of a Natural England stewardship scheme, with particular emphasis on conserving the flora.
Countdown to Battle 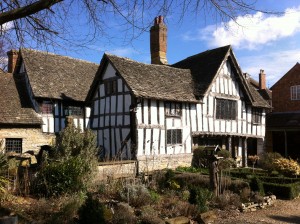 A series of exhibitions held at the Almonry Heritage Centre that explore and interpret the events leading up, month by month, to the final, decisive battle of the Baronâs War.

The Almonry is a remarkable Grade I Listed, 14thÂ Century building; inside you will find an outstanding collection set within 12 rooms and tranquil gardens. Explore through time, from the earliest days of the town, when dinosaurs roamed the swamps, up to the middle of the 20thÂ Century.

Come and discover thousands of years in one building!

For further information about the exhibition and other events throughout the year, please view our website or contact the main office.

To commemorate the historic battle, Evesham will be hosting a fortnight of events beginning the 1st August, 2015.

A wargaming event will take place over the weekend. On display over this weekend, probably at St Lawrence church, there will also be a tapestry on loan from Lewes depicting the battle of 1264 there.