King’s College London is one of the top 20 universities in the world (2014/15 QS World University Rankings) and the fourth oldest in England. It is The Sunday Times ‘Best University for Graduate Employment 2012/13′. King’s College London has a particularly distinguished reputation in the humanities, law, the sciences, and social sciences including international affairs.

King’s College London will be supporting the 800th Anniversary of Magna Carta through an important research project, which will produce the first clause-by-clause commentary on its content in a hundred years, as well as hosting lectures and other commemorative events.

Researchers at Kingâs College London will collaborate in an examination of the 1215 Magna Carta, which will result in the first clause-by-clause commentary on its content in a hundred years. The three year project is due for completion to coincide with the 800th anniversary of the pivotal document, which for the first time in English constitutional history asserted the rights of the king’s subjects against the crown.

David Carpenter, Professor in Medieval History at Kingâs, will work with historians from the Universities of East Anglia, Oxford and Christ Church, Canterbury. They will also work on the first ever commentary on the 1225 Charter, the version that passed into law.

At the University of East Anglia, where the project is based, Nicholas Vincent (Principal Investigator) and Hugh Doherty (a former Kingâs College London student), will collect all the original charters and letters of King John, throwing entirely new light on the making and meaning of the Charter. The project is funded by the Arts and Humanities Research Council.

King’s College London will be hosting a range of lectures open to the public, featuring speakers renowned for their work on Magna Carta and the Medieval World.

12th February: Lord Judge & Anthony Arlidge QC: ‘Magna Carta Uncovered.’
Lord Judge and Anthony Arlidge QC bring their wide legal experience and forensic skills to uncover the original meaning of the liberties enshrined in Magna Carta, and to trace their development in later centuries up to the drafting of the Constitution of the United States of America.

Click here for more information on the event and ticket availability

17th – 19th June
The Magna Carta Project will host this landmark conference on the Great Charter of Liberties, and showcase major new discoveries.

Leading academics will give lectures at King’s College London on the 17th and 18th of June, and at The British Library on the 19th. See more information about speakers and venues below.

Click here for more information and to book tickets. 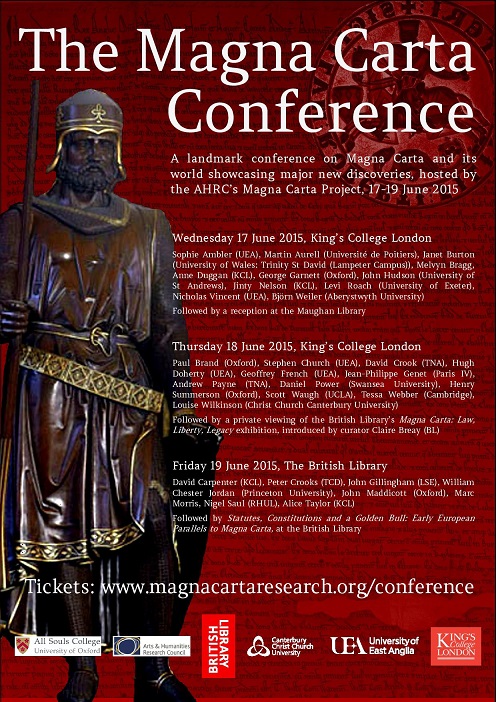