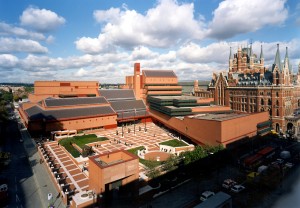 The British Library houses two of the four original surviving 1215 Magna Carta, as well as the key original documents which tell the Magna Carta story in 1215 including: the Articles of the Barons, the unique copy of the list of the baronsâ demands which were reflected in Magna Carta; the papal document which declared Magna Carta null and void in August 1215 and a sealed copy of Henry IIIâs 1225 Magna Carta. The British Library has a permanent Magna Carta room in its Treasures Gallery which is open to visitors for free all year round. 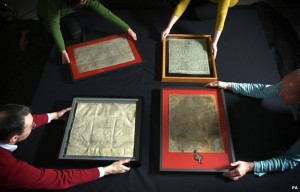 To mark the beginning of the anniversary year, the four surviving original 1215 copies of Magna Carta were brought together for the first time in history. The unification, was held at the British Library in collaboration with Lincoln Cathedral and Salisbury Cathedral and supported by the law firm Linklaters. 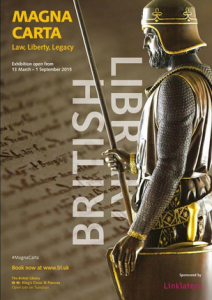 Foundation of democracy or rallying cry for modern rights? Â One of the worldâs most famous documents, Magna Carta has inspired some of todayâs fundamental liberties. Yet it started as a practical solution to a political crisis 800 years ago.

Since 1215, Magna Carta has evolved from a political agreement to an international symbol of freedom. Uncover the story of how its power has been used â and abused â from its genesis through to todayâs popular culture, in the largest exhibition ever staged about this world-famous document.

Explore centuries of dramatic history, from King John, medieval battles, revolution, wars, empire and the struggle for the right to vote, right up to todayâs satirical commentaries. Together, for this once-in-a-lifetime moment, are the iconic documents and artefacts that tell the story of Magna Carta: two of the four original 1215 Magna Carta documents, Jeffersonâs handwritten copy of the Declaration of Independence and one of the original copies of the US Bill of Rights, both on display in the UK for the first time, together with stunning manuscripts, paintings, statues and royal relics.

Discover the history, and challenge the myth, of one of the worldâs most famous documents.

Nicholas Vincent, author and Professor of Medieval History, University of East Anglia, explores the long history of Magna Carta. Why did a 13th-century peace treaty agreed between King John and his rebel barons in a field near Windsor come to be seen as a founding statement of the rights of man? And why have recent discoveries fundamentally altered the way that we understand its context?

Magna Carta and our Constitutional Future

Magna Carta sets in words the principle that in England the executive power â the king â should be subject to the law of the land. Yet, 800 years on, the United Kingdom still has no codified constitution, and many of us struggle to understand the basis of how our state is set up. The Political and Constitutional Reform Committee of the House of Commons has been consulting on whether a written constitution is necessary and how it ought to function. Its final report is discussed by a panel chaired by Graham Allen MP

In a talk based on his compelling new book, The Soul of the Marionette, political philosopher John Gray looks at the very idea of free will, set against the enormous forces â biological, physical and metaphysical â that constrain our every action. Gray is the author of a number of highly regarded and controversial books, including False Dawn, Straw Dogs, and The Silence of Animals.

This salon of conversation, expert talks, and gin-laced concoctions comes back to the Library to explore the quirkier aspects of medieval life around the time of Magna Carta.

Following the acclaimed Peopleâs Manifesto tour of 2009, comedian and activist Mark Thomas embarks on a new enquiry â to find out what rights and freedoms should be enshrined in a new Magna Carta 800 years after the first one. With the help of expert speakers and the audience, Mark will get the ball rolling at this special pre-tour show, before heading off around the country to find out what the nation thinks.

William Marshal, Earl of Pembroke, was the first baron named in the 1215 Magna Carta. An ally of King John, he undoubtedly played a critical role in saving the Plantagenet dynasty and, historians have argued, was one of the prime architects of the settlement brokered at Runnymede. Dr Thomas Asbridge, Queen Mary University of London, charts Marshalâs remarkable story.

Mon 1 Jun 2015, 18:30 – 20:00.
Magna Carta came to America with the first charters, which guaranteed colonists the ‘privileges, franchises, and immunities’ of English law. In the years leading up to the Revolution, Americans drew upon Magna Carta in framing their arguments against British policies. Ideas drawn from English constitutionalism, including Magna Carta, helped Americans shape their state constitutions and the Federal Constitution, especially the Bill of Rights. The story of American constitutionalism is one of both tradition and innovation. In the 2015 Robert H Smith Lecture in American Democracy, Professor A E Dick Howard explores how Magna Carta has left an indelible mark on American constitutionalism. At the core of this legacy is the idea of the Rule of Law.

The exhibition will be at the heart of a wider Magna Carta programme at the Library with a series of public events, a conference, a learning programme, and an online legacy for Magna Carta in 2015 and beyond. A large-scale artwork by a leading British artist has been commissioned by the British Library and the Ruskin School of Art at the University of Oxford to accompany the exhibition and will be announced later this year.