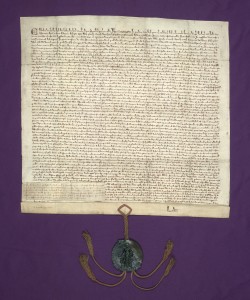 The City of London played an active role in the events that led to Magna Cartaâs creation in 1215 and the Mayor (later known as the Lord Mayor) was appointed, along with the barons, to see that its provisions were carried out. London was also the only city specifically named in the document, in the clause that stated that âthe City of London shall have all its ancient liberties by land as well as by water.â

The grant requires the mayor to be presented to the sovereign for approval and to take an oath to be faithful. These provisions have been respected ever since, and still govern the annual election and swearing in of the Lord Mayor. The City of London Corporationâs 1297 Magna Carta includes Edward Iâs seal and the original writ directed to the Sheriffs of London, ordering that the Charter be promulgated within the City. The Charter was confirmed in Parliament, which gave the document statutory force.

The City Corporationâs 1297 Magna Carta is kept at Guildhall Art Gallery. The document is widely regarded as one of the finest surviving 13th-century copies. Because of its delicate nature, it currently only goes on display for special events such as Open House and City festivals. On 12th September 2014, the new City of London Heritage Gallery opened to the public, with Magna Carta spearheading the launch. Click here for more information.

On the 1st June the City of London launched Magna Carta and the City walking tours with Temple Church. Find out more about tour availability here.