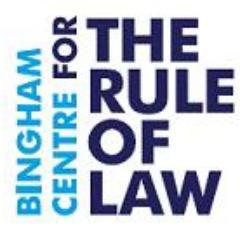 The Bingham Centre for the Rule of Law was launched in December 2010 and is an independent research centre devoted to the study and promotion of the rule of law worldwide. The work of the Centre is focused on understanding and promoting the rule of law; considering the challenges that it faces; providing an intellectual framework within which it can operate; and fashioning the practical tools to support it. The Centre is named after Lord Bingham of Cornhill KG, the pre-eminent judge of his generation and a passionate advocate of the rule of law. The Centre is part of the British Institute of International and Comparative Law, a registered charity based in London.

The Bingham Centre is planning a number of activities and events to mark the 800th Anniversary of the sealing of the Magna Carta in 2015. We are co-organising two events during Magna Carta week in 2015, which are generously being hosted by the Honourable Society of Gray’s Inn, which was Lord Bingham’s Inn of Court:

Further details about all of our events and how to register will be available on our websiteÂ www.binghamcentre.biicl.org