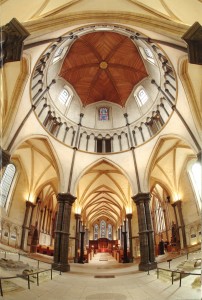 The Charter, the Temple, and the Temple Church, ‘Mother Church of the Common Law.’
(Photograph is copyrightÂ Chris Chrisdoulou)

Since 1608, the Temple in London has been the land of Inner and Middle Temple, two of Londonâs Inns of Court. The Temple is geographically and professionally at the heart of legal London, and will be at the heart of the Anniversaryâs celebrations.

The Temple was as central to Englandâs polity in 1215 as it is today. It was effectively King John’s London headquarters, November 1214 â May 1215. From the Temple the charter was issued in November 1214 that guaranteed the freedom of the English Church. For a week in January 1215 John was confronted in the Temple by a posse of barons demanding a charter; these fraught days opened the road to Runnymede. From the Temple, on 9 May 1215, the charter was issued that still, to this day, guarantees to the City of London the right to elect its own Mayor.

At the heart of the Temple stands the Temple Church. Here is the effigy of William the Marshal, the greatest knight of the age, who mediated between King and barons and was a witness to the Charter; he reissued the Charter in his own name as Regent to the young Henry III, and so ensured its survival. The Marshal died in 1219 and was buried next to his close friend Aymeric, Master of the Temple, who had also been a witness at Runnymede. Next to the Marshalâs effigy lies the effigy of his eldest son, William, who was among the Charterâs surety-barons.

Magna Carta was the supreme icon of liberty for the lawyers of Inner Temple who resisted the absolutism of the Stuart kings in the 1630s. Middle Templars took the Charterâs principles with them to America in the same years. Five members of Inner or Middle Temple would sign the Declaration of Independence in 1776, seven Middle Templars the American Constitution in 1787. Such links remain strong: the American Ambassador, Chief Justice and Attorney General are all Honorary Benchers of Middle Temple.

Inner and Middle Temple are working on a major programme of conferences, lectures and other events, for the study and re-affirmation of the Charterâs principles throughout the Common Law world and beyond. The Temple Church will celebrate the London Charter with a service early in May 2015, and on Sunday 14 June 2015 will present a rededication to the Charterâs principles.

The Knights Templar had a choir of choirmen and boy-choristers in the Temple Church; the Church now has one of the finest such choirs in England. The choir will surely have sung for King John and the barons in January 1215; it will sing again, 800 years later, at these services in the Church that now houses three of the heroes of Runnymede.

For more information about The Temple Church and Magna Carta, please click here.

The BBC World Serviceâs Outlook programme will be recorded in the Temple Church from 11.30am on Saturday morning. Host Shaimaa Khalil and a panel will examine the international legacy of Magna Carta and ask why it remains an icon of freedom and democracy so many centuries after it was written.

The panel will include former South African judge Richard Goldstone, American legal scholar and constitutional expert Professor A E Dick Howard, Libyan lawyer Elham Saudi, and Dr Satvinder Juss, Professor of Law at Kingâs College London. They will âexamine the international legacy of Magna Carta and ask why it remains an icon of freedom and democracy so many centuries after it was written.â

The Temple Church Choir will also sing, the Master of the Temple, Robin Griffith Jones will set the scene as it was in 1215, and actor Julian Glover will read excerpts from Magna Carta itself.

Temple’s summer of Magna Carta celebrations climaxes with the chance to get inside the beautiful surroundings of Inner Temple, Middle Temple their gardens, Temple Church and the Royal Courts of Justice – including parts not normally open to the public. Tours, family-friendly entertainment and a delicious food market will combine to make a great day out for all. Part of Open House London weekend.
Sat and Sun: 10am – 5pm
Free of charge.
All events take place at Temple, London, EC4Y
Nearest tubes: Temple, Blackfriars, Chancery Lane

Dates for your Diary