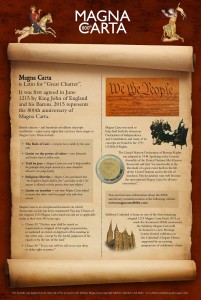 The Committee has designed and is producing several thousand special copies of a Magna Carta facsimile â the front side has an image of the 1215 Salisbury Magna Carta and seal and the reverse side an explanation as to why Magna Carta is important today (pictured, left). Local authorities will be able to purchase these facsimiles and provide them to their new citizens throughout 2015.

The first Magna Carta Citizenship Ceremony took place at Brent Civic Centre, where new British Citizens were provided with a facsimile and information about the Great Charter. This ceremony was held on 20th January to coincide with the BBCâs âDemocracy Dayâ, which launched the Corporationâs coverage of Magna Carta in 2015 â a cross-channel season entitled âTaking Liberties.â Programmes throughout the year have highlighted Magna Cartaâs continuing relevance in the 21st Century.

The facsimiles come with their own tube, and appear like scrolls.

If you are a local registrar and would like to organise a Citizenship Ceremony, or would like to purchase facsimiles, please contact Mark Gill at [email protected]