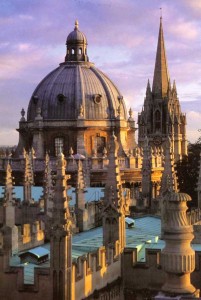 Oxford is the birthplace of King John and the University of Oxfordâs Bodleian Library holds nearly a quarter of the worldâs original 13th -century manuscripts of Magna Carta. Of the seventeen known surviving Charters, four are in the Bodleian including three of the four surviving 1217 Charters. Besides those three, the Bodleian also holds a fourth âengrossmentâ â an official document from the Royal Chancery bearing the rulerâs seal â in the shape of a 1225 issue of Magna Carta that once held the Great Seal of Henry III. No other institution has such a concentration of Magna Cartas.

The first Magna Carta was sealed 800 years ago but it was also a symbol for the English Civil War and an inspiration for âThe Levellersâ of Burford in the 17th century. Oxford in the Civil War was at the centre of the national stage, with King Charles making his Headquarters at Christ Church. Ramparts enclosed the city, college silver was melted down to make coins, and Oxford became a garrison rather than a university town.

In an exhibition entitled Marks of Genius, the Weston Library will display the Gloucester Charter on 21 March 2015 and will run until 20 September 2015.

The library is also planning a smaller display in the atrium of the Weston Library and hopes to show two other Charters there in May and June, with a special celebration event planned for the Magna Carta sealing anniversary day, 15th June 2015.

Oxford Brookes University will be reflecting on the Significance of Magna Carta in Contemporary British Society. Highlights include a one-day symposium in March 2015 for older pupils, students and the local education community to discuss questions relating to Magna Carta together with a Moot Court run by the Law Department and a 12-month Historical Understanding project working with Year 7 students from the Oxford community. Primary and secondary school pupils together with children from local learning disability charities will display their work in the Brookes’ Glass Tank exhibition space from 22nd June to 24th July 2015. Also, a high profile “3 Chancellors” event on 20th March 2015 with Baroness Helena Kennedy, Jon Snow and Shami Chakrabarti discussing topics including Magna Carta – tickets for which are now sold out.

Oxfordshire Libraries will be participating in activities to support the 800th Anniversary of the sealing of the Magna Carta, in Oxford and around the county, with a focus on the arts and encouraging young people to become more active citizens. Experience Oxfordshire will be promoting Magna Carta walking tours, events and exhibitions to local, national and international visitors as well as encouraging participation in LiberTeas in Oxford. www.visitoxfordandoxfordshire.com. Celebrating Magna Carta Group Tour: http://mediafiles.thedms.co.uk/Publication/OS-OX/cms/pdf/Itin.MC.pdf

2015 Oxford Conference: Magna Carta and Freedom of Religion or Belief: 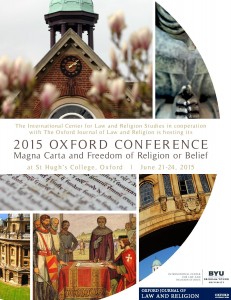 Join leading academics, policymakers, lawyers, and students for a conference commemorating the 800th anniversary of the Magna Carta. The conference, which includes presentations and visits to Runnymede and the Inns of Court, will address a blend of historical and current issues.

Professor R.H. Helmholz, University of Chicago Law School, author: ‘Magna Carta and the Law of Nations’, in Magna Carta, Religion, and the Rule of Law (Cambridge, 2015)

Oxford in the History of the Nation Tour:

The city of Oxford has been at the centre for âcouncilsâ between kings and warring factions since the 11th century. King John, born in Oxford, and his son King Henry III, regularly called upon Oxford scholars to help them run church and state and twenty six Prime Ministers and statesmen have been educated at Oxford University ever since the 13th century. Discover the history of the âOxford Parliamentâ of 1258, when Simon de Montfort drafted the âProvisions of Oxfordâ which calls for regular Parliaments with the monarch with representatives from the counties – the birth of our modern parliament. The Tour starts from the Visitor Information Centre in Broad Street. Call the Group Desk on 01865 252037 or email [email protected] for more information.

On 27th June Oxford will host Medieval Day, in partnership with Oxford Castle and the Society for the Protection of Ancient Buildings. For one day only, the Medieval Siege Society will set up camp in the castle grounds. Chat to the cooks, weavers, leatherworkers and archers as they roam the site, bringing to life the natural sights, sounds and smells of a medieval community. Learn about their daily lives, handle period replicas and observe first hand camp cooking, fire lighting, hand sewing, and armour and weapon maintenance.Observe local craftsmen demonstrating traditional skills still used in the preservation of historic buildings today. Get involved and try your hand at stone letter carving, wood carving, lime plastering, stonemasonry, and much more. There will also be falconry, archery, battle re-enactment, calligraphy workshops, storytelling and talks.

Half an hour west of Oxford, the beautiful Cotswold village of Burford has the commemorative plaque in memory of âThe Levellersâ. On 17 May 1649, three soldiers were executed on Oliver Cromwellâs orders in Burford churchyard. They belonged to a movement popularly known as The Levellers with beliefs in civil rights and religious tolerance inspired by the Magna Carta. The Levellers Day celebration takes place on Sunday 16th May in 2015. www.facebook.com/levellersday

Two of the images below, of the confirmation of the Forest Charter, & the 1217 Magna Carta at the Bodleian, are courtesy of & copyright Bodleian Library: