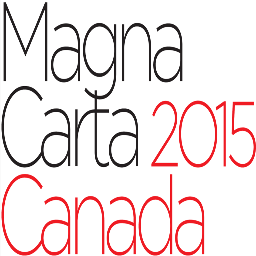 Magna Carta Canada is a not-for-profit organization based in Toronto, made up of likeminded volunteers who believe the 800th Anniversary offers us a once in a lifetime opportunity to highlight the importance and relevance of Magna Carta to the people of Canada.

In this year of the 800th anniversary of the issuance of Magna Carta under the seal of King John, Canada is proudly participating in the world-wide celebrations with several significant initiatives.

The most important, and the most exciting, is the traveling exhibition being organized by Magna Carta Canada, which will feature Durham Cathedralâs original copy of the 1300 exemplifications of both Magna Carta and The Charter of the Forest. The fully interactive exhibition, which is being designed by Canadian museum and exhibition design firm Lord Cultural Resources, is set to open on June 12, 2015 at the Canadian Museum of History in Ottawa/Gatineau. The exhibition will then travel to the following Canadian cities:

The exhibition
The exhibition will be anchored by a 15 minute documentary style film, which features several prominent Canadians discussing the impact of Magna Carta upon Canadian governance, rule of law and society. The film will also provide important context to the events of 13th century England, and how that contributed to Magna Carta.

Magna Carta Canada has already sponsored a panel discussion hosted at the Canadian Parliament Buildings by Speaker of the House of Commons Andrew Scheer, during which the panel considered the impact of Magna Carta on Canada. Further panel discussions and seminars are being planned in the host cities to coincide with the arrival of the exhibition.

At the heart of the Canadian celebrations will be our educational program, which consists of three separate initiatives, aimed at specific age groups and which will be available complimentary to all Canadians in both of Canadaâs official languages, French and English. For primary school age children, Magna Carta Canada has been fortunate enough to be able to secure from What on Earth Publishing the rights to adapt for Canadian audiences their wall-mountable learning tool timeline which sets out the history and impact of Magna Carta through the centuries.

For children ages 12 to 17, Magna Carta Canadaâs education experts have prepared lesson plans which are designed to complement Canadian middle and high school curricula and can be used as part of an existing lesson plan, as stand-alone lessons or to accompany a classroom visit to the exhibition.
Finally, the Federation of Law Societies of Canada, and the Council of Canadian Law Deans are sponsoring an essay competition among law students across Canada, with the winning submission to be chosen in October, 2015.

Magna Carta Canada has commissioned a book written by Dr. Carolyn Harris, a history professor at the University of Toronto, called Magna Carta and its Gifts to Canada, to be published by Dundurn Press. This book will be available on May 2, 2015 in both print and e-book formats.

Canadians are very excited to share in the exceptional festivities planned to mark the 800th anniversary of Magna Carta. We hope to share that excitement with the rest of the world.