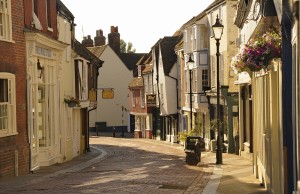 Faversham, Kentâs âMarket Town of Kingsâ so called because of its links with English kings and queens over more than a thousand years. The Kent town possesses a magnificent set of charters, including a confirmation of Magna Carta presented to the Barons and Port of Faversham in 1300.

Favershamâs Magna Carta is the last reissue of King Edward Iâs seal and was granted due to the townâs connections with the Cinque Ports. The international importance of the Faversham Magna Carta was initially overlooked in the townâs archive, which is not surprising as Faversham has one on the largest collections of municipal charters in the UK dating from 1252 to 1685.

Favershamâs rarely displayed Magna Carta will be the centrepiece of this major free exhibition which will interpret the importance of the medieval Magna Carta to todayâs concepts of the freedom of the individual, democracy and society. The âFaversham Charters Collectionâ exhibition will display the best of Favershamâs charters with an audio visual presentation bringing some of the townâs treasures to life.

Dates and venues are as follows:

This free exhibition will highlight the long history of protest in Faversham. For more information, visit www.favershamsociety.org

The Alexander Centre Lecture Series, every Thursday throughout the exhibition starting at 7.30pm.
A free series of lectures hosted by Professor Kenneth Fincham, University of Kent

28th May: âWhy does Faversham have a Magna Cartaâ? Presented by Peter Tann local historian and author of âThe Royal Charters of Faversham.â

6th June: âMagna Carta Gala Concert. The world premiere of âToads on a Tapestryâ a cantata celebrating Favershamâs Magna Carta, bringing together more than 200 amateur and professional performers in the impressive setting of St Mary of Charity Church, Faversham.

For further information and tickets at Â£15 each concessions also available contact www.favershammusicclub.co.uk

13th â 14th June: âTrial by Juryâ The Assembly Rooms, Faversham. Performances at 3pm and 6.30pm on Saturday, 13th and at 3pm on Sunday, 14th. A one act comic opera by Gilbert and Sullivan, performed by Faversham Youth Choir. A free event with a retiring collection.