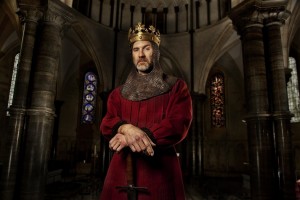 Richard the Lionheart is dead. His less than heroic brother, John, is determined to keep his grasp on the English throne, in spite of the stronger claims of his nephew, the young Prince Arthur. Increasingly threatened by Arthurâs supporters at home and in France, John finds the answer to his woes: he will blind the boy with hot irons.

The remotest in time of all Shakespeareâs English history plays, King John, with its cynical allegiances and ruthless politicking, now feels his most abrasively modern.

This is a first for the Globe, and the Royal & Derngate, and a rare opportunity to see some vividly memorable characters brought to life on the stage â especially the wildly outspoken Faulconbridge, âthe Bastardâ, one of Shakespeareâs most thrillingly caustic and sardonic political commentators.

Click here for more information and to book tickets.

Please note: tickets for all related events are sold separately to tickets for performances.

Tell us what you think about King John. Tweet us your thoughts to @The_Globe and include the hashtag #KingJohn. Or add your comments on our Facebook page.