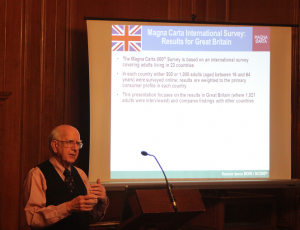 The publicâs âawarenessâ of Magna Carta was assessed in 23 countries from Argentina to Canada, India to the US by the Ipsos MORI survey organisation for the Magna Carta 800th Commemoration Committee.

All questions were asked in all countries, with the exception that question 3 was not asked in China.

In contrast, just six per cent of adults in France say they are aware of Magna Carta, lower than other countries including Poland (10%), China (18%) and South Korea (21%).

The survey included a fictitious âInternational Declaration of Democracy of 1910â, inserted by the pollsters to check how many just guessed. In Britain, one in eleven (9%) mistakenly believe they know about this non-existent document.