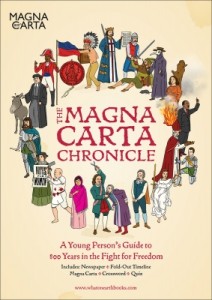 The Magna Carta Chronicle is the official young personâs guide to this yearâs 800th anniversary commemorations. The Chronicle includes more than 45 tabloid newspaper stories so that the events of 800 years read as if they happened yesterday â making them easy and fun for anyone of any age to read.

A two metre long fold-out timeline charts nearly 100 moments from the laws of Hammurabi to the terrible experience of Malala Yousafzai after her attempted assassination by terrorists simply for daring to go to school.

A souvenir facsimile copy of the 1215 edition of Magna Carta, now housed at Salisbury Cathedral, has been reproduced on the back of the Magna Carta Chronicle timeline so that schools can hang up it up on classroom walls. It comes with simple annotations that explain the key clauses in the document that are the foundation stones of liberty and the rule of law throughout many parts of the world today.

A further 50 copies of the Chronicle were prizes on a social media quiz from 22nd April – follow @MagnaCarta800th on Twitter for more details.

Click here to read the story of the Magna Carta Chronicle & Magna Carta 800th – from development to completion in just four months.

The Magna Carta Chronicle app contains a fully detailed copy of the timeline as well as more than 40 newspaper articles detailing key moments over the last 800 years that have led to the kinds of freedoms we benefit from today. You can explore the content by touching, dragging, pinching and zooming. You can flip to the textual information on the back and read it like a book or browse around the illustrations on the front following any of the many threads which make up the web of Magna Carta history. This interactive app is ideal for use in classrooms, touchscreens or whiteboards or for individuals of any age to explore on their tablets and iPhones.

To test your knowledge of all this history we have also included a “one minute challenge” Touch the “quiz” button on the toolbar along the bottom of the screen to try the quiz.

The Magna Carta Chronicle was sent to every UK primary school

On 21st April, we announced that every state primary school in Britain will receive a copy of The Magna Carta Chronicle. The Magna Carta 800th Anniversary Committee believes it is vital that we help teachers and pupils learn about the Great Charter as part of the ongoing narrative of human rights and personal liberties.

21,000 primary schools received a copy. This was widely covered by international news – read the stories here:

BBC News: A Copy of Magna Carta for every UK primary school. 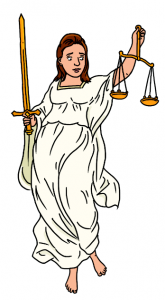 Starting on 22nd April, the official Twitter and Facebook accounts of the international Magna Carta Commemoration, @MagnaCarta800th, and Magna Carta 800th Anniversary, asked one question a day from The Magna Carta Chronicle’s timeline quiz. Questions asked featured a key moment in the history of Liberty, and were added to this page.

Winners received a free copy of The Magna Carta Chronicle.

Christopher Lloyd has written numerous books on world history including the best-selling What on Earth Happened? The Complete Guide to Planet, Life and People from the Big Bang to the Present Day (Bloomsbury 2008), now translated into 15 languages worldwide. In 2010 he established the publishing house What on Earth Publishing, specialists in art of telling stories through timelines, with illustrator Andy Forshaw. They have since created a series of timeline titles covering Big History, Nature, Sport, Science and Shakespeare in partnership with the Natural History Museum, Science Museum and the Shakespeare Birthplace Trust. Christopher lectures all over the world in museums, schools and festivals connecting the curriculum together to create a more holistic view of knowledge. For more details visit www.whatonearthbooks.com or contact [email protected]

Q1: Which ancient ruler was responsible for creating the oldest surviving legal code?

Q2: The Cyrus Cylinder was discovered in the ruins of which ancient city?

Q6: Which of the following cities was NOT sent a copy of Magna Carta?

Q8: Which creatures spread the Black Death to humans in Europe – and devastated the continen?
a) Mice
b) Bats
c) Squirrels
d) Fleas

Q9: Sumptuary laws are designed to do what?

Q10: Which preacher stirred up peasants into revolt alongside Wat Tyler in 1381?

Q11: In Shakespeare’s play Henry VI Part 2, a peasant leader Jack Cade and his cohorts agree that the first thing they will do during their rebellion is … ?

Q12: Which of the following machines inspired Johannes Gutenberg when he was making his first moveable – type printing press?

Q14: The list of books, first issued in 1559, forbidden by the Catholic Church was known as the … ?
a) Index Expurgatorius
b) Index Periculum
c) Index Mortis
d) Index Finger

Q16: Which English King gave his royal assent to the Act known as Habeas Corpus?

Q18: Which country was the first to pass a Bill of Rights in 1689?
a) England
b) France
c) United States
d) Russia

Q19: Russian monarch Peter the Great issued a tax on which of the following?

Q21: American colonists who protested against paying taxes to Britain in an event known as the Boston Tea Party were disguised as … ?
a) Clowns
b) Native Americans
c) Cowboys
d) Porters

Q22: When the 13 American colonies declared their independence from Britain they outlined the right of all men to ‘life, liberty, and the pursuit of ….’ ?
a) Wealth
b) Happiness
c) Freedom
d) Love

Q23: Where did members of the Third Estate (the common people) meet after being barred from an audience with the French King in 1789?

Q24: Which freedom fighter is sometimes known as ‘El Libertador’?

Q26: Which evil was once described as “bloody traffic”?

Q27: In what year was the trade and transport of slaves banned in Britain?

Q28: The Education Act of 1870 was championed by which political party?

Q29: Hundreds of thousands of people celebrated what in 1886 in New York City?
a) The opening of the New York subway
b) The completion of the world’s tallest skyscraper
c) The unveiling of the Statue of Liberty
d) The first ‘freedom’ bagel

Q30: What is the motto for the General Federation of Trade Unions?
a) Unity is strength
b) Strength in numbers
c) Workers unite
d) If you can’t beat ’em, join ’em

Q31: Which famous politician was instrumental in helping pass the Parliament Act of 1911, making the house of Commons the supreme law – making body in the UK?

Q32: Whilst campaigning for women’s right to vote suffragette Emily Davison was killed by …?

Q33: What were the initials of Lawrence of Arabia?

Q34: Which of the following amendments to the US Constitution gave women the right to vote?

Q35: Who was the first female MP to take a seat in the House of Commons?
a) Emmeline Pankhurst
b) Nancy Astor
c) Constance Markievicz
d) Beatrix Potter

Q37: Which of the following countries abstained from voting in favour of the Universal Declaration of Human Rights?
a) United States of America
b) France
c) Greece
d) Saudi Arabia

Q38: In 1955 Rosa Parks, a seamstress from Alabama, USA, was arrested for?
a) Driving the wrong way down a one – way street.
b) Sewing the wrong buttons on the President’s jacket.
c) Protesting against a ban on women drivers.
d) Refusing to give up her seat on a bus.

Q39: US civil rights leader Martin Luther King made his most famous speech in 1963, immortalised with the words … ?
a) I have a vision
b) I have a dream
c) I have an idea
d) I have a plan

Q41: Which famous politician described the divide between Eastern and Western Europe as an Iron Curtain?

Q42: People who took chipped – off parts of the Berlin Wall to keep as souvenirs were known as … ?
a) Chipolatas
b) Blockheads
c) Wallies
d) Wall Woodpeckers

Q44: Who was the Archbishop of Canterbury when the Church of England first allowed the ordination of women?
a) Robert Runcie
b) Rowan Williams
c) George Carey
d) George Clooney

Q46: The European Court of Human Rights is based in which city?
a) Strasbourg
b) Brussels
c) The Hague
d) Geneva

Q47: Fruit and vegetable seller Mohamed Bouazizi set himself on fire in protest against the government of which country?
a) Syria
b) Egypt
c) Saudi Arabia
d) Tunisia