Young people from Oxfordshire are at the centre of a groundbreaking project taking place throughout Oxfordshire County Councilâs libraries marking the 800th anniversary of Magna Carta and 750 years since the birth of parliament.

Find Your Voice is designed to help those aged 13 to 21 become more active citizens and aims to encourage them to find their political voice. Arts organisations involved in the project include Oxford Contemporary Music, Pegasus Theatre, Oxford Poetry Hub, The Story Museum and InsightShare. Arts Council England, The Houses of Parliament, as part of Parliament in the Making, and the Magna Carta Trust are partners in the project. 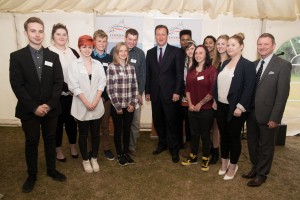 Prime Minister David Cameron saw some elements of Find Your Voice at a tourism event at Cogges Farm, Oxford.

Groups of young people are writing, designing exhibitions, creating musical soundscapes, films and digital art, drama and dance during six to ten week projects with libraries and will discover how to become âchange makersâ through different media, with the help of creative practitioners, as well as staff in the countyâs libraries.

Workshops are underway in libraries across Oxfordshire, and poetry readings and performances by young people have taken place at The Story Museum for LiberTeas day, for an Open Doors poetry workshop with poet and poet and writer Kate Clanchy and at the project launch on Democracy Day at Central Library Oxford this summer.

A touring exhibition created during workshops with The Story Museum was displayed on the 24th July at a Magna Carta celebration at Cogges Manor Farm, Witney with Experience Oxfordshire, where 15 young participants had the chance to meet the Rt Hon David Cameron.

75 Find Your Voice participants will take a tour of the Houses of Parliament on 12th November and there will be a rare opportunity on the 19th November to observe a âSelect Committeeâ in action. The Science and Technology Select Committee is chaired by Nicola Blackwood M.P. and will take place in The Bodleian Library, Oxford at the Divinity School & Convocation House, the site where parliament has met 4 times in history.

For National Takeover Day on Friday 20th November, young people from the project will âtakeoverâ the roles of Councilors and Officers of Oxfordshire County Council, vote on current budget issues in Council Chambers and get a chance to understand how local government works. From 4.00pm members of the public will be able to enjoy the installation of an artist-made Christmas Tree in Oxford Central Library, decorated with âSpeech Baublesâ, filled with the wishes and desires of young people to make change happen in their local community and the world, joining in with Oxfordâs Christmas Light Festival celebration that evening.

The Find Your Voice Showcase on 25th February 2016 will feature performances, film and soundscapes created during the project.

We are pleased to announce a legacy project – a Find Your Voice Anthology of creative writing from the project and a Guidance Film and Booklet for distribution to libraries across the U.K. designed to guide library managers on how to run democracy projects with young people and will be distributed to Libraries nationally. The film accompanying the booklet is created by InSightShare with young people, using a set of facilitated techniques to involve young people in shaping and creating their own films, a way of bringing people together to explore issues and voice concerns, and build skills to act for change.

Summary of Find Your Voice Events

â¢ After these sessions, there is also the opportunity for young people to submit their Find Your Voice creative writing published in a Find Your Voice Anthology, edited by nationally known poets Kate Clanchy and Alan Buckley.

â¢ 12th November â Trip to London for a tour of the Houses of Parliament, to be met by Andrew Smith M.P.

â¢ 19th November â Rare opportunity to observe a âSelect Committeeâ in action in Oxford. The Science and Technology Select Committee is chaired by Nicola Blackwood M.P. and will take place in The Bodleian Library, Oxford. (16+ only) at the Divinity School & Convocation House, the site where parliament has met 4 times in history.

â¢ 25th February 2016 – End of Project Showcase exhibition and performances at Oxford Central Library and The Story Museum. The event also celebrates the launch of the Find Your Voice Anthology and the completion of the Guide to working with Young People in Libraries with Film for distribution to libraries across the U.K.