Runnymede Magna Carta Legacy (the Charity established to provide a lasting Legacy in Runnymede for the 800th Commemoration of Magna Carta), is pleased to announce that following the successful completion and installation of the statue of HM Queen Elizabeth II (pictured, below) now situated by the riverside within the Runnymede Pleasure Grounds at Egham, the next phase of this project is underway. On the 14th June the Statue was unveiled by the Speaker of the House of Commons, The Rt Hon John Bercow MP, in the presence of many distinguished guests. 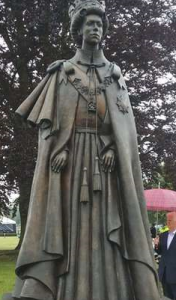 Linking the freedoms gained, many set out in Magna Carta, with the reigns of our soverigns from the time of Edward the Confessor to our current Queen, a Timeline has been produced plotting the critical dates in direct relation to the reigning monarch. A temporary outline was in place for the statue unveiling on the 14th June. A permanent replacement has now been commissioned and will be incorporated in a 6′ wide path leading from the river landing stage to the statue.

Placed in this position the many visitors will walk the path of freedom as we know it today as they approach the statue of our longest reigning monarch.

The Timeline project forms part of the surrounding setting for the satue and has been funded by generous dontions from individuals and members of the public as well as a Grant provided by the UK Government as allocated by the Magna Carta 800th Anniversary Committee.

The details will be etched in stone on either side of the pathway and the work will be supervised by Bruce MaCarthur from Crest Nicholson PLC, with design by Murdoch Wickham and installed by the contractors NATTA who were all responsible for the statue installation and its immediate setting. It is anticipated that all will be completed well before the end of 2015.

A small gathering of the lead members involved were invited by the Mayor of Runnymede, Cllr Derek Cotty to join him together with the Lord-Lieutenant of Surrey, Mr Michael More-Molyneux and the High Sheriff of Surrey, Mrs Elizabeth Kennedy on 9th September at the statue site, to toast The Queen on the day she becomes the longest reigning British Monarch.

The project has now started with layout and design in progress. The aim is to complete by early December with an announcement probably on the 2nd December the date of the Mayor’s Civic Reception in Runnymede.