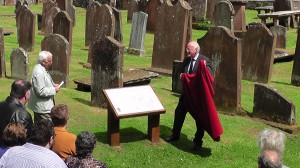 Scotlandâs only celebration to mark the 800th anniversary took place in Tongland on Saturday. Under warm sunshine, almost 70 local residents and invited guests gathered in Tongland churchyard to watch Mr. Alexander McCulloch, Deputy Lord-Lieutenant of the Stewartry (pictured), unveil an information panel outlining the link between Alan Lord of Galloway, Magna Carta, and the founding of Tongland Abbey in 1218.

The panel serves to inform visitors to the churchyard about the medieval Abbey which once stood on the site. The panelâs main feature is an artistâs reconstruction drawing of how Tongland Abbey might have looked in 1450. The gathering proceeded to an adjacent marquee on the site of the former Tongland manse, through kindness of the owner Mrs Susanne Powell. An 800th anniversary cake was enjoyed by all.

At Ringford Village Hall, an appreciative audience of almost 100 heard a lecture from Professor Richard Oram of Stirling University on Alan, Lord of Galloway, and his role in Magna Carta. The lecture demonstrated Alanâs considerable importance in Britainâs military and political history during the reign of King John of England and Alexander II of Scotland. The occasion also saw the launch of a new tourist leaflet about Alan, Magna Carta and Tongland Abbey, and the project organisers plan to take the story into local primary schools in the new term. A small bursary has also been set aside to encourage further research at university level on Alan and Magna Carta. 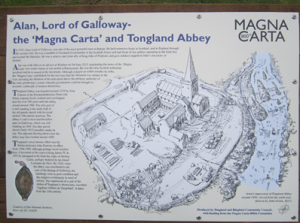 The abbey has recently been the subject of a geophysical survey aimed at identifying the extent of the original structure. The spire was reputedly the tallest in Galloway at around 200ft, and was still standing in 1700. The Abbey ruins were quarried for building stone, leaving only one short length of wall and a doorway remaining today, which form part of the old parish church.

Tongland and Ringford Community Council are most grateful to the Magna Carta 800th Anniversary Committee. Financial support from the Committee made the whole project possible. The subject also received the attention of BBC Scotland radio and television news.