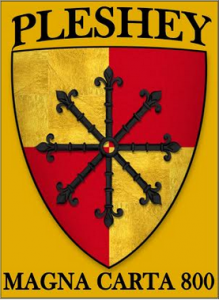 Pleshey was the chief manor of Geoffrey de Mandeville, Earl of Essex and one of the East of England barons chosen at Runnymede to secure the charter from King John in 2015. The people of Pleshey believe that telling Geoffreyâs story is a once in a lifetime opportunity for our small village and will provide a lasting legacy.

Pleshey’s Magna Carta Celebrations have engaged, enlightened and entertained our local community with the significance of Magna Carta and the part played in this momentous moment in history by our baron, Geoffrey de Mandeville.

The celebrations launched on the 20th March with a presentation to the village of a facsimile of Magna Carta from the Magna Carta Barons Association; and a talk from Chelmsford Museumâs Curator describing the events leading up to Magna Carta and the role of our rebel baron.

On 9th and 10th May Pleshey staged a Medieval Weekend with re-enactments and living history displays on the motte and bailey site of Pleshey Castle.

On Sunday 14th June, Pleshey hosted a LiberTeas event. It was hosted in the churchyard of Holy Trinity, where medieval games were played, the church bells were be rung and a beacon lit in the evening.

On 14th November, local thespians will present an evening of comic sketches in a Medieval Extravaganza at the Village Hall.

During the year, a Sewing Bee will bring members of the community together to create a commemorative wall hanging for Holy Trinity. The children will also have a special time together learning about Magna Carta and creating their own artwork, which will go on permanent display in the Village Hall. We will also be involving the three local village schools, creating assemblies and touring the Magna Carta facsimile.