With a population of just 306, Curry Mallet is one of the smallest places to have been involved in the Magna Carta celebrations. Masterminded by a committee of three people whose ideas were then broken down into the project categories, heritage/legacy, education and community, this two and half year labour of love proved to be a great success but only achieved because of the willing help received from so many people.

Church Banner:
The committee was formed in March 2013 following a letter sent by Peter Sinclair to the Parish Council about the 800 year Magna Carta celebrations in 2015. After attending the encouraging initial meeting to form The Magna Carta Barons Association held in Bury St Edmunds Cathedral in May 2013, our first initiative was a legacy project and we approached Elaine Going, a local resident and keen embroiderer, about working on a new alter cloth for the Grade 1 listed church. This was deemed too ambitious for the time scale
involved and a banner was suggested instead. Sue Nicholls and Marilyn Hayward, talented and local needlewomen, were recruited and in October 2013 the first stitch was sewn; eighteen dedicated months later the banner was complete. It is a work of great beauty and tremendous skill and depicts:

– The four seasons of the farming community
– The church and its ancient bells, the oldest two being made by Joanna Sturdy in the 1400s. The Joanna Sturdy bells are recognized by the diamond shaped lozenge included in the bell-foundersâ mark cast into the bell (the lozenge is the heraldic mark of womanhood). As far as is known they have hung in Curry Mallet since their inception â only 10 others now exist.
– Somerset apples and the tree of life
– Teasels for a past industry in the village
– Reflecting freedom – poppies for those who sacrificed their lives in two world wars and a butterfly.
– The Duchy of Cornwall and the William Malet coats of arms
– A scroll for the Magna Carta 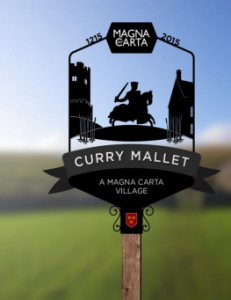 We released a competition to design a village flag and sign. The winner was Rob Penny of Ashtree House and the flag is now evident in various parts of the village (including the School Church, Village Hall and Mallet Court). The flag shows the Malet coat of arms on the yellow and the Magna Carta Barons Association logo on the red. The village sign (pictured) is yet to be finished and put into place. 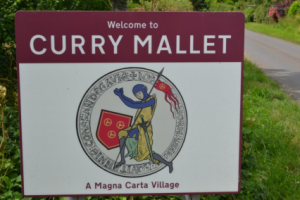 During the History Festival in 2013 we built an excellent relationship with South Somerset District Councilâs Arts Development Officer. After discussions, the result was an eye-catching design (pictured) which is now in situ at both ends of the village. The signs were put in place in the week leading up to the Magna Carta celebrations and SSDC issued a press release which received excellent coverage. The Arts Development Officer was also positive in helping us with the free of charge printing of flyers and posters, and a list of events brochure all posted through doors on a regular basis so that villagers were kept well informed of activities.

Story competition
Stories based on the theme âRebellionâ were judged in September by fellow villager Julia Copus, renowned award winning poet and childrenâs author. Stories were also judged by Somerset based Barbara Spencer, popular author of ten great books for children, teens and young adults. The younger children were asked to write a story about a wonder horse and/or a wonder cat whilst the older children had the same theme as the adults. 48 adult stories were received, with three or four from as far away as California and South Africa; 50 from 12-16 year olds, with one from France, and 72 stories from the under 11âs were received – including one from Australia.

April 2nd 2015 â Race Meeting.
Taunton Racecourse helped to advertise Magna Carta 800 with a race called âCurry Mallet Magna Carta Celebration Chaseâ at their Easter Family Race Day. Although the weather was murky it was a successful day with a big crowd and an advert appeared in the race card as well as on their big screen.

25th April 2015 â Magna Charta Rose Bed.
Primrose Mallet-Harris, a direct descendent of Baron William Malet resides in the village and she donated a bed of special Magna Charta Roses which she had sourced from France. A team of stoic diggers turned over spade after spade of rubble on the verge outside the Manor Houseâs ancient Grade II wall until eventually completing a reasonably soily bed for the roses. The Magna Charta rose is an old scented and bushy 19th century hybrid perpetual having bright pink flowers with deeper, almost red shadings and dark leathery foliage. It is fully double and cupped until fully open. 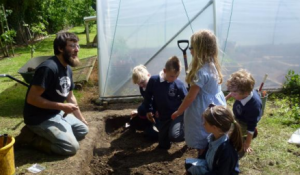 We received an HLF Sharing Heritage Grant to help fund an archaeological dig to try and find out about the medieval origins of the village. Archaeologists from the South West Heritage Trust joined forces with the schoolchildren and GeoFlow who carried out some geophysical surveying in the Glebe field, to help the archaeologists locate where to dig over the Magna Carta weekend.

The children then had a go at being archaeologists for the day, digging test pits in the school garden. They carried
out a range of activities including trowelling, sieving and pot washing as well as a demonstration of the geophysical
surveying given by Liz Caldwell and Nigel Harvey of GeoFlow.

This stellar panel ensured passionate discussion on the pros and cons of a written constitution, and its impact on British politics and society. The audience contributed many challenging comments and questions, which ensured a well-rounded, substantial debate. A show of hands at the end produced a clear majority of the audience against the motion. 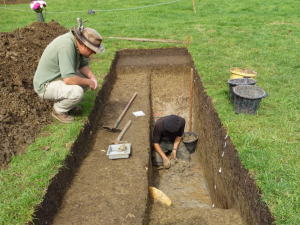 The Hinkley Point Archaeology Outreach team assisted with this community excavation, carried out by archaeologists from the South West Heritage Trust. Students, volunteers and local residents also got stuck in, learning a range of new skills and enjoying the chance to find out about archaeology on your doorstepâ. The aim of the excavation was to see if they could discover anything related to the medieval origins of the village. The Lower Street area in the south of the parish contains properties ending at the church. The area of the west of the church known as Glebe Field, contains earthworks with traces of house platforms and enclosures. This may be the site of an early settlement. The earlier geophysical survey of Glebe Field by local specialists âGeoFloâ, had provided some clear targets for test pitting. The Higher Street area in the north has medieval buildings clustered around a square area, which may have been a green in the medieval period. Test pitting also took place here in the grounds of the Mallet Court. We know that at the time of the Domesday Book in 1086, two estates were held as one manor by Roger de Courcelles. He was succeeded by the Malets. The manor passed to the Poinz and Gourney families and then to the Duchy of Cornwall.

June 13th 2015 â Magna Carta Saturday.
The archaeological dig was ongoing in the Glebe Field by the church and the school open day was very successful with a huge number of visitors, especially in the afternoon.

The PTFA ran the bar and the raffle and, together with the proceeds from the stall which they ran at the medieval day on the Sunday, they were able to raise a much needed profit of Â£930 for their funds. 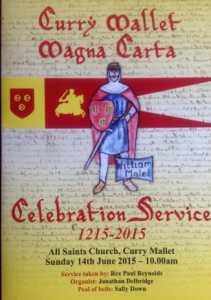 At 9.15 the bells rang out over the landscape. Forming part of the âStrike a Blow for Democracyâ national peal of bells the team, led by captain, Sally Down, rang a quarter peal which included 7 changes of Jacks, Princes, Queens, Kings, Jokers, Tittums and Roundups. The Church Service began at 10.00 and 130 attended to see the dedication of the banner and silver communion cup. Becky Curry, the schoolâs music teacher had formed a community choir earlier in the year after Jeffrey Joseph wrote to us offering his
anthem as part of the celebrations. The sound of 30 voices ringing around the Church was a goose bump moment as they performed his âAn Anthem for Englandâ and then âSumer is Icumen Inâ a Middle English folk song c.1250. A commemorative service sheet was handed out to the congregation (pictured) as they arrived. 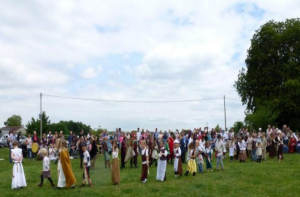 At 11.15 the children paraded from the school to the Glebe Field (pictured), their banners waving in the wind; they re-enacted the sealing of the Magna Carta to a wide audience and strong applause. The Sutton Household Re-enactment Society had set up camp the night before and they were on hand throughout the day for visitors to try on armour, practice archery and watch various demonstrations. The birds of prey held everyoneâs attention and the archeologists proudly exhibited their finds and answered many searching questions. All the while there was background music from Stampita a folk group with a medieval sound. Even though it was cloudy and windy, the day remained dry! This was a Heritage Lottery Funded project.

June 20th 2015 â Lance Allenâs 800 Mile Bike Ride.
Trowbridgeâs Town Clerk set off from Curry Mallet at 10.00am after being hosted to bacon baps and coffee by shop owners, Phil and Jane Scott. The ride was completed in Alnwick in Northumberland after he had visited the 22 baronâs towns and villages along the journey and all within 8 days. What a fantastic achievement and Lance has raised an incredible amount of money for both Dorothy House Hospice and Bikes for Africa.