As part of the celebrations for the 800th Anniversary of Magna Carta a set of four new bells (pictured) have been cast and hung at St Maryâs Church, Thorpe, near Runnymede. 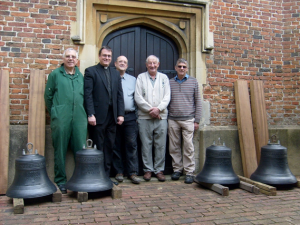 St Maryâs Church, a Grade II* listed building, is the oldest church in the Borough of Runnymede (see www.achurchnearyou.com/thorpe) and pre-dates Magna Carta. Four new bells to the four already in place, as well as installing electronic controls, allows a far greater number of changes to be rung in celebration of Magna Carta 800th as well as for community events and other special occasions.

Following receipt of the Faculty granting permission to proceed with works to improve the ring of four bells with an additional four bells and automate the chiming mechanism, our grant of Â£10K from the Magna Carta 800 Committee was released. This added to the generous donations from members of the congregation and wider community of Thorpe, and monies raised at the Magna Carta Street Party from the Grand Prize Draw have taken us very close to our target. 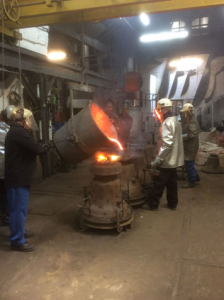 We believe these new bells to be the only ones to be cast in the UK for the anniversary of Magna Carta. Indeed, the earliest sections of St Maryâs Church date from the 10/11th century meaning the Medieval Church would have been standing when the Magna Carta was sealed just a few miles away, along the banks of the Thames on the Runnymeade Meadows in June 1215.

The bells have been inscribed with the names of King John, the then Archbishop of Canterbury Stephen Langton, Adam, Abbott of Chertsey Abbey, and the Magna Carta 800th logo.

The existing four new bells were cast in 1958 when the churchâs original three bells dating from 1693, 1725 and 1758 were melted down to make the current four.

At the start of September the final phase of works took place. This involved the Cumbrian Clock Company installing eight electro-magnetic hammers that will chime the bells, a hammer for the inside of the four new bells and a hammer mounted on the outside of the existing original bells, ensuring the existing ringing mechanism is retained for those bells. Electrical works were also carried out by Mr Flip Bakker of PJB Electrical Banstead, and our church architects Nye Saunders inspected the new installation and associated works.

The dedication of the Thorpe Magna Carta Bells

This took place on the evening of Tuesday 8th September 7:30pm. We welcomed The Very Reverend Dianna Gwilliams, Dean of Guildford Cathedral to preside over the ceremony. The service was followed by a glass of wine. All were welcome to attend this ceremony. 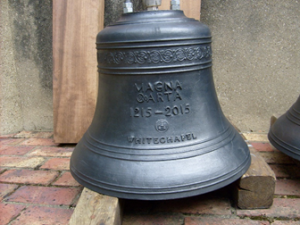 Our Vicar Father Damian Miles said: âWe were absolutely thrilled to hear that we had won a grant from the trust and the parish has been working hard to raise its share, including through a Magna Carta Thorpe Party in May when the whole village celebrated with stalls, food and a street party. The Magna Carta is a great symbol of democracy and freedom. The then Archbishop of Canterbury, Stephen Langton was part of brokering that historic deal and people of faith around the world today continue in his footsteps to strive for justice. My prayer is that the spirit of Magna Carta may touch the lives of many, liberating people who live far from our shores and helping humanity to learn to live with diversity and always in freedom, just as our forebears agreed just down the road from Thorpe all those years ago. Our existing bells were rung out as part of the Magna Carta weekend celebrations in June as we âstruck a blow for democracyâ and the new bells will help ensure the charterâs legacy is not forgotten.â

The Vicar, Wardens and St Maryâs Parochial Church Council would like to say a very heartfelt thank you to all those who have made the Magna Carta Bells project possible:

The Magna Carta 800 Committee, Mr Malcolm Loveday (Diocesan Bells Advisor), Mr Andy West, Mr Flip Bakker, Whitechapel Bell Foundry,
The Cumbrian Clock Company, Nye Saunders Architects and all those who have given generously in terms of time and financial support for this
Commemorative project. Thank You.

It is our hope that the complete set of eight bells will ring out the joy of Mary for many years to come here in Thorpe Village.

On very special occasions, and during the Christmas and Easter seasons, we hope our bells will ring out hymns and tunes.

As our Church and Village Christmas Lights have become a real feature in Thorpe we plan for the bells to ring out with Christmas Carols at 4pm every evening between Monday 7th and Sunday 27th December 2015. Donât miss it!