Home » Projects » Round 3 Grants » The History of Parliament Trust

The History of Parliament Trust marked the 800th anniversary of Magna Carta by hosting a major international conference: âMaking Constitutions, Building Parliaments: Constructing representative institutions, 1000-2000â. The conference is the annual conference of the International Commission for the History of Representative and Parliamentary Institutions (ICHRPI). The conference benefited from a Â£5000 grant from the 800th Committee, and was also kindly supported by the UK Parliament, Kingâs College London, and Royal Holloway, University of London.

âMaking Constitutions, Building Parliamentsâ was a joint celebration and investigation of this yearâs two anniversaries, both of enormous significance in the history of English and British constitutional and legal history: Magna Carta, of course, but also the 750th anniversary of the Parliament summoned by Simon de Montfort in 1265, following his defeat of King Henry III in a civil war which was the culmination of a baronial revolt. The conference took 1215 and 1265 as a starting point for an exploration of the initiation and development of political institutions from the early Middle Ages onwards, and an assessment of their role in state formation or nation building.

The conference took place at Kingâs College London, Royal Holloway, London and Portcullis House, Palace of Westminster, between 30th June and 4th July 2015. Professor Adam Sutcliffe welcomed us to Kingâs College at a reception in the Old Rolls Chapel (now party of the Maughan Library, KCL); Professor Jonathan Philips welcomed us to Royal Holloway with a reception on the hottest day of the year following our plenary lecture; Professor Lord Norton of Louth, one of the History of Parliamentâs trustees welcomed us to Parliament at a reception in the Speakerâs House by kind permission of Mr Speaker (and we were lucky enough to have an impromptu talk from Pugin expert Rosemary Hill).

Nearly 150 speakers from Europe, the US and Latin America gave papers on topics ranging from Magna Carta and its exploitation by Sir Edward Coke in the seventeenth century to the evolution of the Sabor, the medieval parliamentary assembly of Serbia; from the use of petitions as the basis of parliamentary discussion of the common good and common interest in the English Parliaments of the thirteenth and fourteenth centuries, to petitioning and popular constitutionalism in nineteenth and early twentieth century Britain; from the Sicilian constitution of 1812 and the Saxon Parliaments of the 1831, 1920 and 1946 to the representative assemblies and mandate politics of Syria and Lebanon in the early 1920s. A series of round tables discussed topics of interest to parliamentary and constitutional historians, covering digitisation of parliamentary archives, oral history and parliamentary research, analysing parliamentary discourse and national parliamentary projects. A particularly popular panel covered women in the Westminster Parliament.

Two major plenary lectures, attended by the public as well as by the conference attendees, provided keynote discussions of the relationship between Magna Carta and Parliament â Professor David Carpenter (KCL) spoke on âSimon de Montfort, Magna Carta and the development of Parliamentâ â and on the importance of a mythic idea when it comes to the creation of a constitution â Professor Colin Kidd FBA (University of St Andrews) spoke on âFounding myths and their Discontents: the British and American Constitutions comparedâ.

The conference provided food for thought and comparison about the development of constitutions and parliaments worldwide, and particularly the influence of the British model on many other countries, providing many telling examples of the knowledge and influence of Magna Carta and the English Parliament in the constitutional journeys of Italy, Spain, Germany, Belgium and plenty of others besides. Discussions are under way about achieving publication of some at least of the papers concerned. 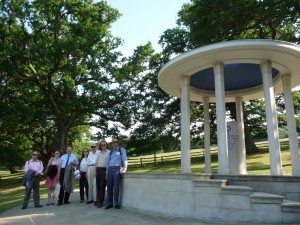 Pictured: the ICHPRI at the Magna Carta Memorial, Runnymede.