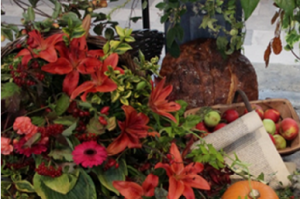 Between the 15th September, 2015 and the 20th September 2015, Salisbury Cathedral hosted over 30,000 blooms in a Flower Festival which commemorated the 800th anniversary. The ‘Magna Flora ‘ Flower Festival was arranged by c. 500 flower arrangers, and included a tribute to Elizabeth II, as the Britain’s longes reigning monarch.

Symbols are a powerful means of conveying messages regardless of language, culture or religion. Flowers are a common and often uniting form within symbolism, providing a universal âlanguageâ for connecting across international boundaries. This project engaged member countries of the Commonwealth in the wider meanings of Magna Carta through the symbolism of flowers and in turn connected the Commonwealth and its values through a virtual community.

Building upon the Commonwealthâs shared values of justice and citizenship, the project involved working with one school from each of the 53 countries of the Commonwealth. After classroom activities on Magna Carta, each pupil, or group of pupils, will be given the task of proposing a flower or plant that grows in their country that in their view best reflects as a symbol the concepts of Magna Carta and of freedom, and will be expected to make a case supporting their choice.

The 53 winning entries were presented to Salisbury Cathedral and featured as part of the ‘Magna Flora‘ Flower Festival.

Links to the blogs as they are updated will be posted below.
January 2015: ‘Finding Tuvalu’