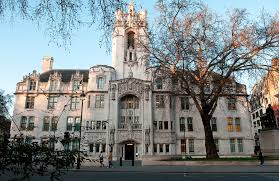 Approximately 20,000 people visited the UK Supreme Court over the summer of 2015, where, thanks to support from the Magna Carta 800th Anniversary Commemoration Committee, a special exhibition was curated exploring the legal impact of Magna Carta in 1215 and beyond.

The interpretative panels explained how the legal significance of Magna Carta developed over time and was used by the courts to protect fundamental freedoms, as well as to inspire emerging nations to place the rule of law at the heart of their written constitutions.

The exhibition was opened formally by HRH The Duke of Kent and HRH Princess Alexandra at the end of July 2015.

The centrepiece of the exhibition was one of the later reissues of Magna Carta, sealed by Edward I in 1300, on loan by kind permission of the Dean and Chapter of Westminster.

Alongside the copy of an original Magna Carta, visitors could see a rare copy of the first unabridged English language edition of the charter. George Ferrers’ translation, first published in 1534, was corrected and reprinted in 1542, and a copy of that publication was kindly lent to the Court by the library of the Faculty of Advocates in Edinburgh.

Activities for younger visitors were available, along with an animated film produced by the Guy Fox History Project, to encourage children to engage with the exhibition material.

Visitor surveys suggested:
â¢ 95% thought the exhibition was âExcellentâ or âGoodâ;
â¢ Eight out of ten visitors also felt more informed about the Supreme Courtâs work after visiting the exhibition;
â¢ Around one third of visitors were from the UK, one third from the rest of Europe and the final third from elsewhere;
â¢ Around half of the total number of visitors were aged under 30.

At the conclusion of the exhibition, visitors were asked to reflect upon what Magna Carta means to them. Hundreds of people left reactions to the contemporary resonance of the Charter, including:
â¢ âEqual treatment under the law for everyone regardless of backgroundâ
â¢ âI learned that Magna Carta began the concept that government cannot act outside the law. Thank you for the exhibition.â
â¢ âRemembering how many people in the world still donât have the same rights that we do!â
â¢ âLaw is just only when it is applied equally to all people in all situationsâ
â¢ âI like it because it means the Queen or King canât go around doing whatever s/he wantsâ
â¢ âIâm a lawyer in the United States â even 800 years later we can see and feel the Magna Cartaâs influence in our legal system. Amazing!â
â¢ âThis was a remarkable part of British history. I am honoured to have been able to see the Magna Carta today as a student.â

The Supreme Court also hosted a series of Debate Days during September 2015 to run alongside the exhibition. Four sessions were arranged for classes of Year 12/13 students studying law and/or politics, including groups from Bury St Edmunds and Southend-on-Sea.

During the course of these days, students learnt about the history of Magna Carta by spending time in the exhibition and have the chance to debate a legal case centred on principles associated with the document. These include issues like trial without jury in cases where jury tampering is alleged; and freedom to exercise religious beliefs where such behaviour may result in a conflict of rights. Students also had the opportunity to meet lawyers and learn more about life in the profession.

These sessions were very popular and generated positive feedback from both students and teachers.