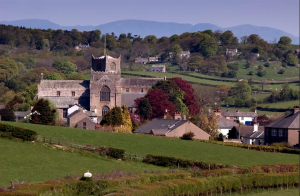 William the Marshal founded Cartmel Priory in 1189, 26 years later his power, authority and the respect afforded him by his fellow Barons enabled him to play a significant role in the sealing then resurrection of Magna Carta.

Our celebrations begin in June with a David Starkey lecture on Magna Carta and the presentation of the winning entryâs in the Magna Carta Young Writerâs Poetry Competition. They will be encrypted on disc and the overall winning poem set to music by the Prioryâs organist and composer Adrian Self. A schoolsâ Democracy Day generating a legacy of Magna Carta school age resource materials and a second historical lecture by Dr Alan Crosby will pave the way to our main five day celebrations in September.

Historical Pageant of Flowers and the Artsâ in Cartmel Priory from 25th to 29th September.

With the support and involvement of the village community, the celebrations on weekend days are enhanced with a âliving history Medieval Tourney and Fayreâ, and a âSon et LumiÃ¨reâ featuring the Prioryâs founder. Increased visitor provision on the 28th September comes from a further Magna Carta lecture and, illustrating Magna Cartaâs influence through the centuries, Talks & Tours of the village provided by the Local History Society. Three varied Concerts and two special Festival Services, one a celebration of âThe Law and Justiceâ, lead by the Organist and Choir of Cartmel Priory with guest preacher Bishop James of Carlisle and the other a âSongs of Praiseâ lead by Levens Choir fill the Festival evenings. The concert programme features leading national early music instrumental group âLa Serenissimaâ and also performances by local award winning musicians, âAmabileâ girlsâ choir and Flookburgh Band whose concert will conclude with a firework display. For details and tickets please see www.cartmelpriory.org.uk