‘The worldâs youth are tasked with presenting a new document that safeguards and promotes the rights, privileges and liberties of either their own country or the whole world.’

Taking the Magna Carta as their source document, the worldâs youth were tasked to present a new document that safeguards and promotes the rights, privileges and liberties of either their own country or the whole world. As in the original document, entrants needed to give particular thought to the powers of presidents, prime ministers and monarchs that need to be limited. Entrants were encouraged to draw lessons from recent national and international events.

This exercise was predominantly creative, but also required a degree of academic understanding of the history, contents, and significance of the 1215 document. The ESU therefore provided links to teaching resources to introduce the topic to young people.

Entrants represented their Magna Carta as a written piece. Video readings of the entry were also accepted but as an augmentation of the written entry. The top 2 entries from national finals were submitted to the ESU Central panel for judging. Continent winners [plus the UK winner] were invited to a Magna Carta Celebration Gala on the 15th October at the ESU HQ in London to present their entry to a live audience. The event was live streamed worldwide to allow the participantsâ host communities [amongst others] to witness the presentation and join in the subsequent questioning of the presenter. 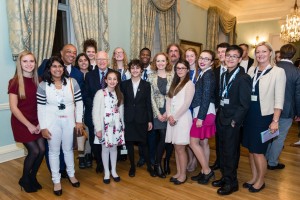 More than 100 nations were eligible to enter this competition. For the full listing, and for more information about the project, click here.

The final winners were:

The continent winners of both the junior and senior age categories were:

*The UK was treated as a separate continent for the purposes of the competition.

We are also pleased to announce a legacy project entitled My Magna Carta: The Constitutional Voice of Tomorrow, which will give the winning entries a further international platform. Utilising the existing My Magna Carta website we will reproduce some of the very best submissions together with short clips from the final event itself, as a way of highlighting key themes discussed by entrants around the globe. Through digital distribution we will allow more young people to access these resources, and develop and discuss their own ideas about some of the most important issues of the 21st Century.