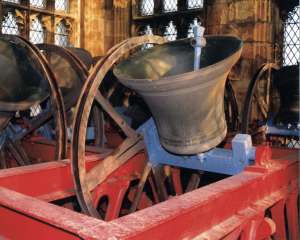 At 3pm, Church bells will ring across the UK and further afield in June 2015 to mark the 800th anniversary of the sealing of Magna Carta.Â  Sunday 14 June has been designated as the Big Ringing Day, although there will be much ringing on other days as well to fit in with local events and commemorations.Â Special ringing is also being encouraged in all towns and villages that have any Magna Carta connection and work is in hand to identify and publicise many of those places where there are bells.

Bells that are rung âEnglish styleâ with rope and wheel do not play tunes.Â  They ring mathematical changes,panerai replica with no one change (or order of the bells) being repeated in each piece of ringing.Â  The patterns of changes are called methods and vary in difficulty from very simple to incredibly complicated.Â  A piece of ringing, called a âtouchâ can last from a few minutes â around 100 changes â to several hours and thousands of changes.Â  If any ringer makes a mistake or if a change is inadvertently repeated the ringing must stop.Â  Ringers often ring peals of over 5,000 changes lasting around three hours, or quarter peals of over 1250 changes, lasting around 50 minutes.Â  These are ringing challenges similar to a ringing marathon or mini-marathon and are rung to celebrate special events locally, nationally or internationally.Â  Ringers enjoy ringing for special events and will often use or create special methods with relevant names.

A new method was rung in a peal on Saturday 23 March 2013 at Egham, close to Runnymede meadows, and was named Magna Carta Surprise Royal.Â  Runnymede Surprise Major has also been rung on a number of occasions.

Ringers everywhere will be encouraged to ring to commemorate the anniversary by ringing special touches of 800 changes, quarter peals and peals, perhaps of 5800 changes.Â  Special methods and compositions will be available on the Central Council of Church Bell Ringersâ website.Â  A number of touches of 800 changes are already available which were composed in 2009 to celebrate the 800th anniversary of the foundation of Cambridge University.

There are estimated to about 40,000 bell ringers in the replicapanerai.net UK, ringing in about 5000 towers.Â  Most of these towers belong to Church of England churches, although there are some rings in other protestant and Roman Catholic churches, town halls and other secular buildings and some are privately owned.Â  Bells are also rung âEnglish styleâ in about 200 towers in other countries, in particular in Ireland, the USA, Canada, Australia, New Zealand, South Africa and Zimbabwe.Â  Church bells in continental Europe and elsewhere are not usually rung with a rope and wheel, but have a variety of other methods of striking the bell, which are less controllable and it is therefore generally not possible to ring mathematical permutations or changes.

If you would like more information or to get replica watches involved please visit the website of the Central Council of Church Bell Ringers or email the President, Kate Flavell ([email protected])