Thanks to a generous matching grant awarded to the Baronial Order of Magna Carta (BOMC) by the Magna Carta Trust/800th Committee, the BOMC has established an annual scholarship at Washington & Lee Universityâs School of Law and will host a triennial symposium to be held every three years in Washington DC, in honor of the Magna Cartaâs 800th anniversary.

The scholarship will be awarded to the most outstanding constitutional law student as chosen by the Washington & Lee faculty based on academic achievement in, and devotion to, the study of constitutional law and its historical development.

The first event was held on 16th April, 2015, at the prestigious Cosmos Club in Washington D.C. 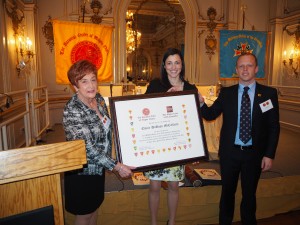 Mark Gill, Executive Director of the MC 800th Committee, travelled from London to present the scholarship award. A cheque for $2,000 was awarded to to Elaine DuRoss McCafferty, who is pursuing a Juris Doctor Degree at Washington and Lee School of Law. This was followed by the presentation to Ms. McCafferty of a specially-designed, framed certificate by Mr. Gill (pictured), Mrs. Dianne Alley Robinson, Chair of the BOMC Scholarship Committee, and BOMC Marshal Robert Pond Vivian.

Comments by Ms. McCafferty were followed by the introduction of the Symposium Panel, an impressive group of legal scholars and practitioners, who offered profound insights into Magna Carta and the individual rights it has bequeathed to all free people.

Professor Russell Miller of the Washington and Lee School of Law was the Moderator. He was joined on the panel by Professor William Hamilton Bryson, University of Richmond School of Law; Joyce Lee Malcolm, Patrick Henry Professor of Law and the Second Amendment at George Mason University School of Law; and Nicholas Donnell Ward, Esq., an attorney in private practice.

At the conclusion of the Symposium there were many questions from the floor. Approximately 130 attended. Footage from the event can be seen below:

796 years ago tomorrow a reluctant, but resigned, and most definitely scheming King John was brought to Runnymede to put his seal to the Great Charter of Liberty â Magna Carta. John might have acceded to the Baronsâ demands...